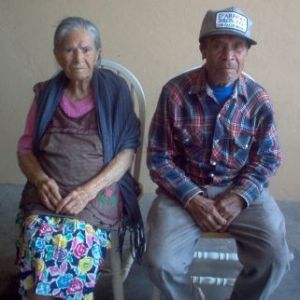 Thursday morning, December 15, 2016, the patriarch of the Gonzalez-Trejo family, Papa Rique died. He had been feeling poorly for the last week or so. He wasn’t able to get out of bed and had fits of trembling. Not getting out of bed really aggravated Papa Rique. He was used to wandering around town for hours every day.

In fact, the last time we saw him was on November 2 during one of his wanders. We were heading to the panteon (cemetery) to visit with Mama Vira on the Day of the Dead and there he was, heading out of the cemetery. We tried to convince him to go on back in with us, but he was having none of it. He was irritated at the women folk and was going home. So we said our goodbyes and watched as he headed up the road, turtle slow, nearly getting clipped twice in less than 15 minutes by passing trucks.

So, being bedridden was absolutely unacceptable to him. He said he was feeling bad enough to head to the hospital. That’s saying something! The nearest hospital is in Uriangato, more than an hour’s drive away. So he sent word for his grandson to take him in his truck. This being a first for a hospital request, the grandson came on the run, leaving his bread deliveries left undone.

Here’s where the story gets a bit confusing. Although he went to the hospital, he died at home a few hours later. I don’t quite understand why he wasn’t admitted to the hospital. Maybe the doctors decided at his age, 90, there wasn’t much they could do for him and sent him home. From what I gathered, he had another trembling fit at home with two of his daughters present. The daughters held onto him until the trembling passed and sat him in a chair. Then both of them left the room. A little later, a granddaughter came into the room and found him dead. Someone was sent for the local doctor who declared Papa Rique had died from a heart attack.

In Cerano, the dearly departed are stacked, lego style in cement boxes. In the plot where Papa Rique was to be buried, the bottom tier was inhabited by a granddaughter who died from complications associated with drug use in 2012. The second tier housed Mama Vira who died in 2014. So now the third tier needed to be built. My husband volunteered to help with the crypt building.

Papa Rique had the rebar and some sand just lying around his house and we had brought some more sand that had been leftover from B’s house construction. However, the cement, mortar, and cal needed to be bought. So we did. My husband spent $500 pesos from the sale of a goat and I ended up spending about the same amount, but the materials were bought and the building of the boveda (crypt) commenced. 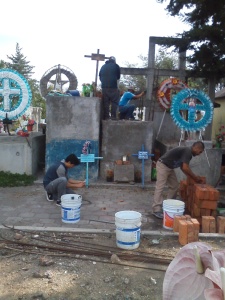 The neighbor, a cousin and two other guys were there as well. There was quite a bit of discussion at the beginning, but after a bit, each maestro (head bricklayer) had a section to complete. 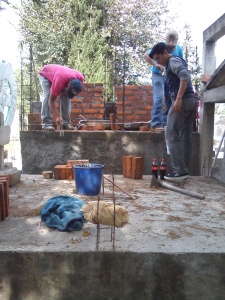 As the day had started to heat up, my son and I went to the store to pick up some drinks. I wasn’t sure if I was allowed in since the store resembled a cantina (bar) more than anything, so I sent my son in. He came back with some cokes for the guys and a bottle of water for me. BUT when we got back to the gravesite, half the crew was gone. Supposedly, they had gone for more material. Several phone calls and an hour later they returned, with you guessed it, caguama (liter-sized beer bottles).

I needed to get back to teach classes, so we left about 2 pm. My husband told the neighbor that if he needed more help, to call. Sure enough, he called. The crew had been lost to a drunken haze and it had started to rain and he wasn’t going to get the top on. So my husband went back to Cerano to work another 2 hours. They finished the actual building, but not the enjari (cement spread over the bricks as a sealant).

The mass was planned for 4 pm the next day, however, there were no slots available at that time what with Las Posadas and all. So, the service and burial were moved up to 10 am. Of course, the tomb wasn’t finished yet. So we headed to Cerano in the morning and arrived just as the funeral station wagon pulled up to collect Papa Rique.

Building material and the flower arrangements were loaded into the back of our truck. My son and I joined the procession of walkers. I had forgotten an umbrella for shade yet again. I’m really not prepared for Mexican funerals. My husband followed behind with the supplies.

It wasn’t far to the church. The service lasted about 30 minutes. Various family members took turns standing with the casket. Papa Rique was praised for his Catholicness and for raising his family in the church. Otherwise, it seemed to be a pretty standard funeral mass.

Then the procession headed to the cemetery. There we found my husband and his cousin, who although not 3 was certainly at least 2 sheets to the wind, working like madmen trying to get the walls of the crypt covered. As the cement was already mixed, they had to keep working, even with the open casket present. 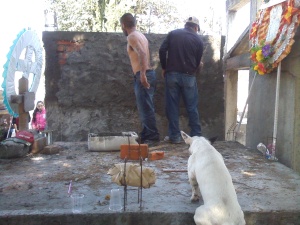 As you can see, the cousin took his shirt off since he was slopping cement EVERYWHERE! That’s the cousin’s dog climbing the crypts.

Soon, the family had enough viewing and lifted the casket into the third tier. My husband sealed the opening. The brother of the cousin took over the work saying that the job would take 20 minutes no more, but with cousin #1 working, he’d be at it all day. Before too long, it was finished.

One of Papa Rique’s daughters asked if my husband would place a Christ image on the front of the tomb, which he did. The flowers were arranged to everyone’s satisfaction. And then there was nothing to do. So we went back to our daily lives, one person less. 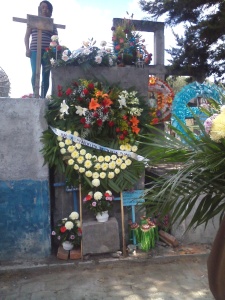