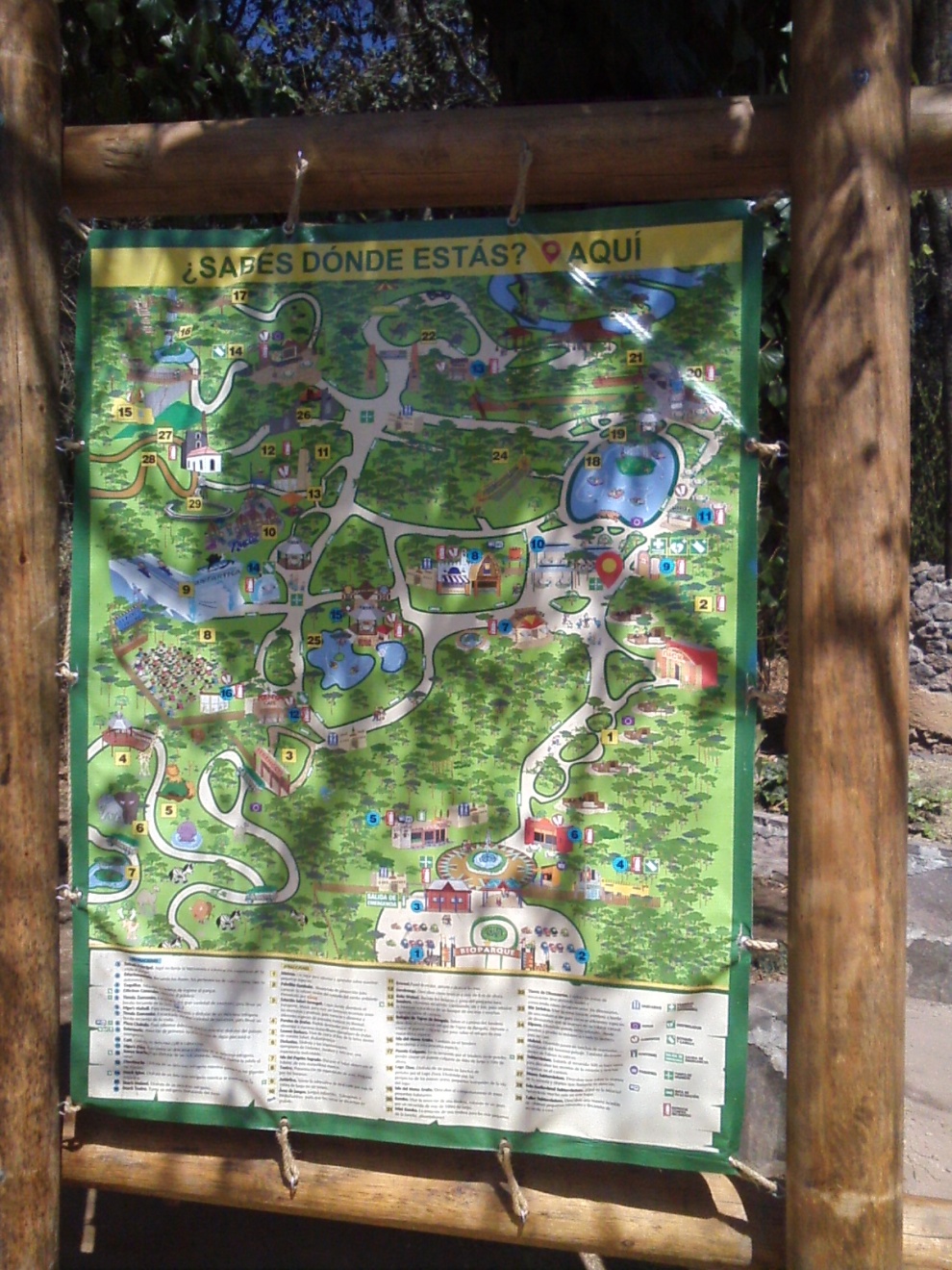 The school I work for went on an “educational” trip in May to the BioParque Estrella theme park in Mexico State and my son and I went along with them. The promotional material and pictures online made the trip look incredible. The reality was a bit of a letdown.

Fountain at the entrance to the park

After a LONG bus ride, we arrived and were shuttled along around the fountain at the entry until it was our turn to be yelled at by a person with a megaphone. We were supposed to have a tour guide, but after leaving the fountain area, he wasn’t seen again. Looked like we were on our own!

Our first stop on the grand BioParque tour was the Subterranium (Underground). It consisted of a mini-museum with pictures of actual miners and a sampling of mining equipment. Then more than 200 of us were herded into a room with only 1 exit for the What is mining? animated video. Fortunately, it was brief. We then descended several flights of unnaturally short steps to the main attraction. We boarded gas powered vehicles and went through a “spooky” mine at incredible speeds completely in the dark. The first few stops were mining scenes, then things got a little fanciful. We passed a huge tarantula, a basilisk, a giant scorpion, Medusa (with glowing red eyes) and the lost city of Atlantis, before returning to our starting position and ascending the unnaturally short steps again.

We lost 8 to 10 members of our group during this process, so we had to set out search parties and stand around for awhile.

Once we regrouped, we headed to la Tierra de Dinosaurios (the land of dinosaurs) and went on the Rio Jurasico (Jurassic River) boat ride. We all loaded into a seriously tilting motor boat and went around a circular canal, stopping at various dinosaurs that moved or squirted water at us. I was hit by the poison shooting Dilophosaurus, splat right in the face. I was not a happy camper. Despite my fear we were going to capsize, we made it back to the dock and filed out. 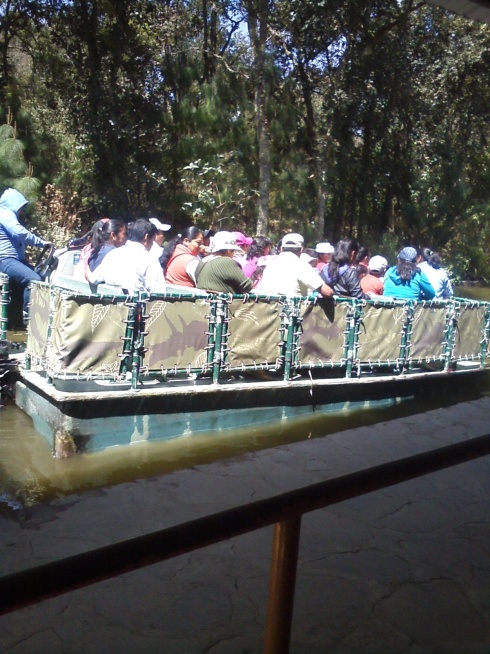 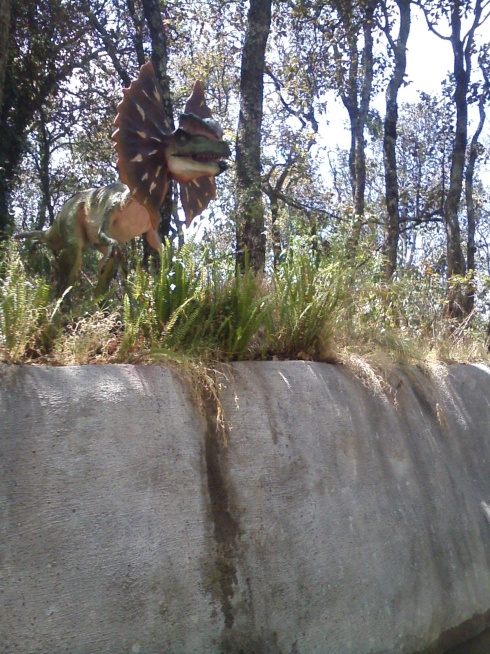 I took advantage of the milling about and searching for stragglers time after this attraction to hit the bathrooms. The lines were really long, but there were both toilet paper and seats in the stalls. Five-star bathroom experience! This is an important aspect of any attraction in Mexico.

We then went to the Sendero (path). The brochure described it as a beautiful 1-kilometer hike to admire the natural world with a few surprises along the way. The tour guide at the entrance to the attraction made a disclaimer that the park would not be held responsible if anyone pregnant, or with heart disease or other physical condition took the hike. We had to give our verbal consent before starting on the path. Red flags should have gone up for me then, but I had been lulled into complacency by the ease of the first two attractions.

It turned out to be a 1.4-kilometer hike over a root filled path, with broken guide ropes along the way. There were at least 100 steps of a variety of heights, shapes, lengths and angles. My knees were in agony! I’m not as young as I used to be you know. There were also 2 suspension bridges. They did seem to be in good shape, and there weren’t any problems crossing them. As for the surprises–the first was a mapache (raccoon) enclosure. It was sleeping. Then there was the tiger enclosure–they were sleeping, I expect they were drugged.

There was a monkey on an island and a tortuga de orejas rojas (red eared turtle). The monkey wouldn’t leave it’s cage since the rest of the island was bare of trees, and it was hot. The turtle was sunning itself on a rock. And that was it for the surprises. It was dry, dusty and difficult to navigate. If there were other things to be admired, I didn’t see them as I was too busy watching my feet so as not to break an ankle and have to be airlifted out of the park.

The only thing interesting on the hike was this plant life. I expect it’s a mushroom of some sort because it was growing at the base of several trees. Kinda looks like corn, doesn’t it? 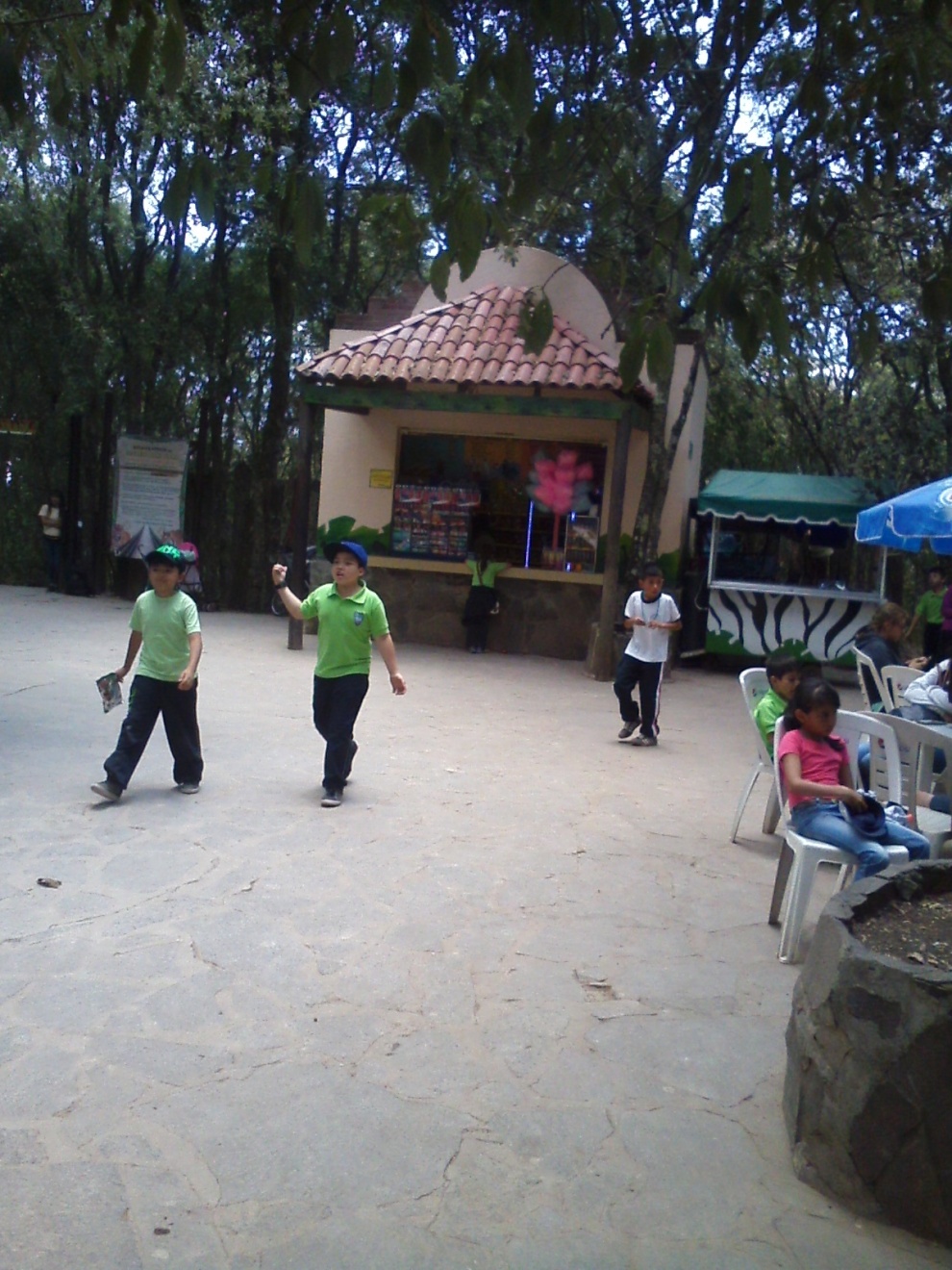 One of the concession stands with extraordinary prices

Anyway, we dragged our sorry butts back to the beginning and gratefully sat down to wait for the slower members of the group. There was a snack bar conspicuously situated there, and of course, everybody wanted some refreshment. Chips were 22 pesos for a bag that costs less than half of that at a grocery store. I didn’t even bother to price the fruit or soda. We made due with our one allotted 1.5-liter bottle of water per person.

Then we headed to Lago Ziwa and the Isla del Mono Araña (Spider Monkey Island). Four-person paddle boats were the main attraction, the route being around the Monkey Island. The lines were tremendous yet again. My knees hadn’t recovered, so I passed on this attraction. My son though managed to loop the island without incident.

There was also a smaller paddle boat attraction for the younger kids. Instead of a monkey island, there were two eagles tied to posts as the “bio” part of the ride.

After waiting an extraordinarily long time for everyone to circle the island, we headed to the Kamba tirolesa (zipline). There actually were two zip lines–one for bigs and one for littles. The big Kamba was more than 100 meters long, and I again passed on this experience. I sent my son as my representative, though.

He said that the dude running the zip lines had to verify twice that he was tall enough to go on the ride. As he was taller than the measuring stick, there shouldn’t have been any doubt, but hey, he’s in charge. There were no helmets or any other sort of safety equipment, including brakes. In order to stop, a guy at the end of the zip line was supposed to catch the rider and drag him or her to a stop. My son said that the brake man had a horrified expression on his face as if just knew this one would get away.

By this time, it was early afternoon, and most everybody was getting tired and cranky. The group leaders bypassed the Teatro Muziki in favor of an earlier lunch. There were oodles of school groups milling around the eating area. We had the students sit down at some dirty plastic tables under a roof and went to get some food. We waited in line for 30 minutes only to be told that our order was at the other concession stand. The school had paid for our lunches. We had 3 choices, hamburger, chicken pattie or hot dog and an order of fries and soda. My son and I ordered the chicken patties–which were cold and had nothing on them but cheese. The vegetables were in a buffet area surrounded by dust and dirt kicked up by the milling school groups, so we passed on those and ate them plain. We each received 1/2 container of floppy fries and the smallest soda in the world. It was far from filling, far from healthy and even further from environmentally friendly.

My son and I finished in record time and opted to hit the bathroom line again and go to the Zoovenirs (souvenirs) store to wait for the slower eaters to finish. The Zoovenirs store was disappointing. The only things I could afford were cheap plastic stuff that I could get anyway. Mugs were $115 pesos, stuffed animals were over $100 pesos, crappy plastic dinosaurs were $450 pesos. Well, you get the idea. No Zoovenirs for us then. 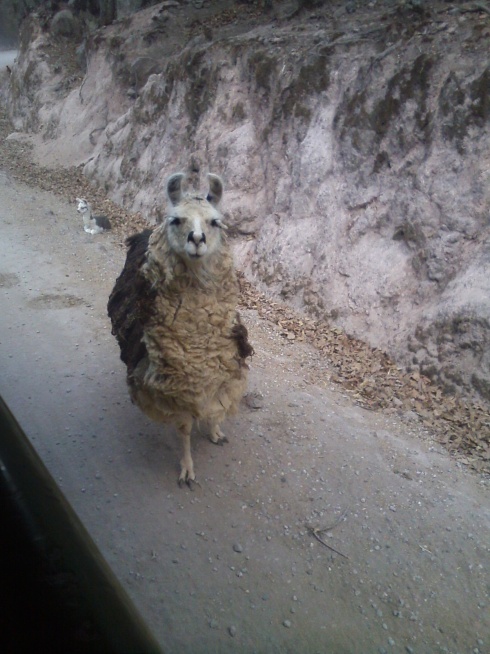 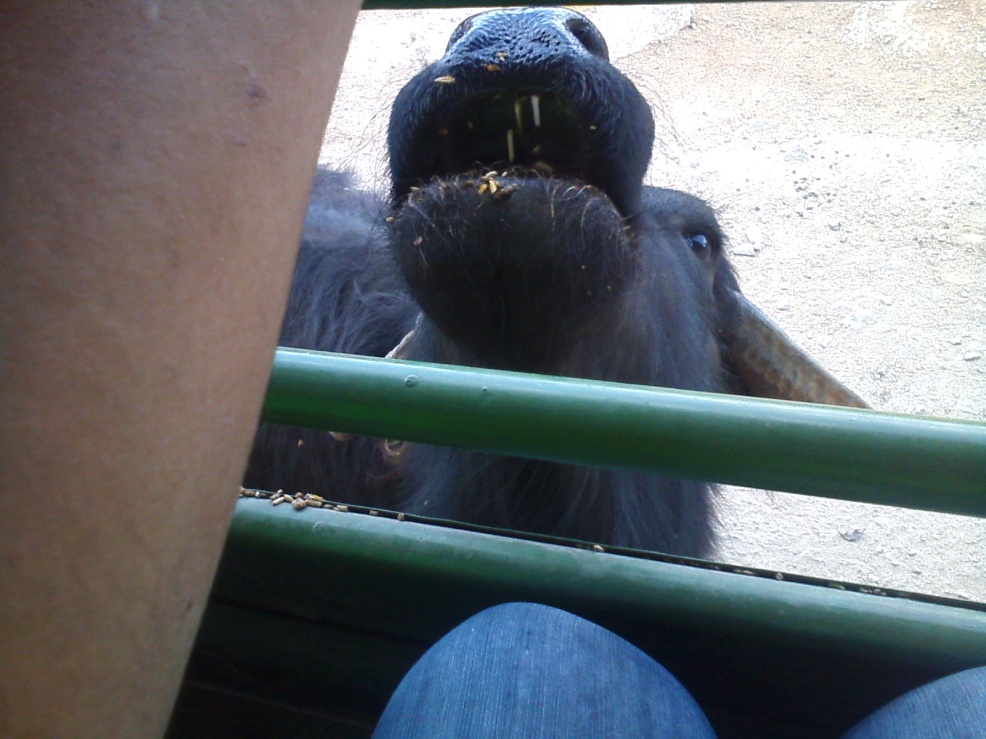 The next stop was the Serengeti. It was a motorized tour of an animal preserve with a petting zoo aspect. We boarded this huge DIESEL tour vehicle and sputtered and smoked our way to the first “free range” animal area. It was mostly goats with a water buffalo and emu thrown in. The emu pecked a little kid and probably traumatized him for life. The water buffalo came right up to the side of the vehicle and opened its mouth for the kids to pour the food in. There were some llamas, camels, buffalos, a variety of deer and antelope, ñandu, ducks, gnu, watusi, nutria, zebras, hippos, and baboons. The main attractions were the giraffes who were too regal to consent to be handfed by our group, the lions that had a 20-foot enclosure and looked to be drugged and the elephants. The elephant enclosure was horrible. It was a circular pit with absolutely NOTHING in it. Both elephants were as far away from the road as they could get and turned their back on our gawking. I expect they were former circus animals that had to be rehomed when it became illegal for animals to be used as circus attractions. What a bleak life these animals now had. And the trash and air pollution generated by this attraction–unbelievable!

Our last stop of the day was Antartica, which was a sliding ride. There were no lines, so most of the kids got two trips in. My son opted to not ride once the braking system became apparent. Some dude at the bottom of the hill would grab hold of the sled and pull it to a stop. If he missed, well, you would get a quick trip to Paraiso de Jirafas (Giraffe Paradise) which bordered the ride. No, thank you. However, you can see that several of our teachers, after crossing themselves, took the risk.

There were a few animal exhibits on the way out, and we saw the rather interesting Capybara–the original R.O.U.S.–rodent of unusual size.

And that was that. We headed back to the fountain and mosied out to the bus for an even LONGER ride home.