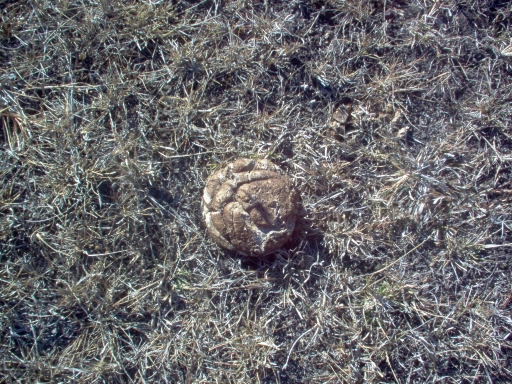 This cow patty represents my current opinion of the legal system here in Mexico.

Having made our offer to the nieces/lawyers of the pozo guy, we made an appointment to receive their answer en 8 días (the following Friday) at the same time.

Super Prez had an appointment to take his daughter for her first confession at 6:00, but we weren’t anticipating the meeting to take too long and so he wasn’t overly worried. R2, G, Super Prez and I waited until 6:30 p.m. before R2 called the pozo guy to see what was up.

To our surprise, the pozo guy didn’t have any idea there was a meeting and didn’t seem in the least bit worried about his case. He even said that the issue with La Yacata was old, even though the third demanda (lawsuit) for the amount of $500,000 is relatively recent. (See Demanda 3–What the….?) He told us we should contact his lawyers and then hung up.

R2 said he would contact the lawyers and see about setting up a second meeting en 8 días (the following Friday) at the same time. He also mentioned that he had seen Chuchi that week. Chuchi told him that he had taken the liberty of giving R2’s phone number to the pozo guy, who had apparently lost it. When R2 mentioned that we had an appointment that Friday, Chuchi said “Le encargo mío tambíen”–which is to say I am holding you responsible for resolving my case as well.

I dislike this expression of “le encargo” since it gives the responsibility of fixing or obtaining to the recipient and removes responsibility from the supplicant. When I had the Crap Shoppe open (See Failing at your own business–Crap Shoppe) I had several things I was to be encargado for on my next trip to the States, jeans, stockings, shirts etc. Those that made the petitions made no mention when and if they would return to then buy the things that I spent time obtaining.

Regardless, Chuchi seems to be of the opinion that R2 is biddable or bribable, which knowing his reputation is entirely possible and makes me even less than satisfied with our current legal representation.

We laughed at Chuchi’s presumption and adjourned.

The following Friday, I arrived early to the office to find that Super Prez was out of town. I asked his secretary to call him and see if we were even having the junta (meeting) because it looked as if was going to rain and I didn’t relish a wet trip home to La Yacata on the moto. She called and Super Prez said he would call R2 to see what was up and call back. Fifteen minutes later, Super Prez called back to say that I could go home since the pozo guy was not going to come and furthermore felt that the offer was muy baja (too low). Since we weren’t inclined to any more negotiation, the court case continues.