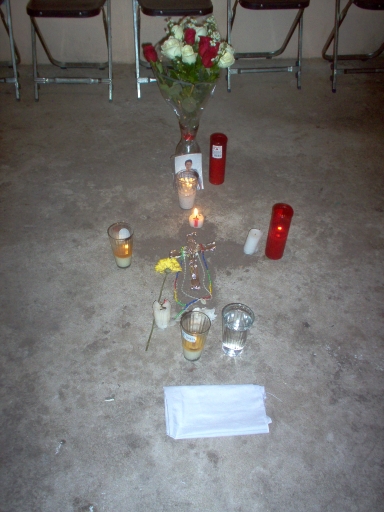 Then began the novena, 9 days of prayers for the release of my mother-in-law’s soul from purgatory.  This was held where her body had been viewed, with the leftover candles from the funeral.  A candle must be lit at all times and no one may sweep, since this would be rushing her soul out of the house. (See Mass and Burial)
Each child took a day to sponsor the novena, providing refreshments for those that came to pray.  I thought my night of hosting went well.  I had to be signaled that the prayer was over and hurried to the kitchen to serve the flan, jello, and juice that I had bought earlier in the day, my son and husband helping to serve.  I hadn’t had time to prepare anything traditional or home-made, but that’s why supermarkets were invented right?
A woman named Socorro did the prayer reading for each evening.  It seemed to be her calling, presiding over novenas when asked.  She isn’t paid per se, the refreshments each night being given in compensation for her time.  (See Parenting Challenge–When someone dies)
Each night, Socorro and her echo, another religious woman, intoned prayers from a little booklet.  It’s important that everyone  sit in the same seat each night, but I didn’t understand the reason for this, just that’s the way its done.  The prayer session lasted about an hour since every few minutes there was a round of choral recitals of Padre Nuestro, (Our Father), and Ave Maria pleading that if my mother-in-law’s soul be found at the gates of purgatory, that she be pardoned as well as any other souls found with her.  Apparently, her eternal damnation or salvation would be based on the strength of our prayers during the novena while her soul was wandering around in purgatory.
A glass of water and a white towel were set out the first night.  This was in case the soul was in need of refreshment.  If the soul visited and drank the water, the towel would be imprinted where it had knelt.
As this was my first novena, I’m not sure how smoothly it goes, but it seemed to me that we had more than our share of issues during the 9 days.
The first night, the little children, who were exempt from the prayer meeting, locked themselves in one of the bedrooms and we had to break the door down to rescue them as they became more and more hysterical on the other side.  Not a very auspicious beginning to the novena.
Then another night all the sons came drunk to the novena and interrupted the prayers abruptly and repeatedly in order to use the bathroom.  Again, not as it should be.
Then the night D was in charge of the refreshments, not only did she not have enough for everyone and I had to supplement with some flan left over from my hosting, but her husband refused to help her serve, demonstrating what an ass he was to all.
Then L was had a screaming fit because my father-in-law had asked where the money from the presidencia was (nearly 3000 pesos) that she had spent on rent for her apartment and local although it wasn’t her money to spend but meant to defray funeral costs.
Another night, I was called away from the novena by the mother of one of my students who happened to be a judge.  She had been given a copy of the lawsuit that Chuchi sent and wanted to speak with me immediately.  As she isn’t the type of woman you say no to, I hurried to her house.  She explained some of the legal terminology and wanted to know for sure if we had answered the charges as there was only a 10-day period to do so.  If the charges were not answered, Chuchi wins by default.  I called R and he assured me that they had.  I wasn’t satisfied so went to the office of Super Prez and asked him.  He gave me a copy of the respuesta (answer to the charges) and I hurried back just in time for the opening prayer.
Then J was to make the traditional corundas for the last night, but B said he wanted enchiladas, and to please him, his sister P made them although it was extra work and angered her own husband and was contrary to tradition.  The three sides of the corunda represent the trinity and the eating of it as a sort of holy communion in honor of the deceased.
The final novena was a 2-hour session.  Not only were the final day prayers said but the dirt that was in the form of the cross on the floor since the viewing must be lifted.  It couldn’t be swept up and had to be scooped by hand in a prescribed manner.  First the right side of the cross, then the left side of the cross, then the foot of the cross where the three Marys wept, and then the head of the cross.  Flower petals, candle wax, and dirt were all scooped into a yellow shoe box.  More prayers were said and the rosary was placed on top. 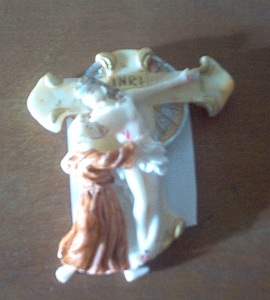 Each attendee was given a small ceramic crucifix, like a party favor, with the following poem on the back:
Fin de novenario
“Muero pero mi alma no muere los amare y los bendeciré en el cielo como lo hice en la tierra”   Agradece Padre e hijos
Loosely translated it read:
End of the Prayer sessions
I die but my soul does not.
I love you and bless you in heaven as I did on earth.
With appreciation: Father and children 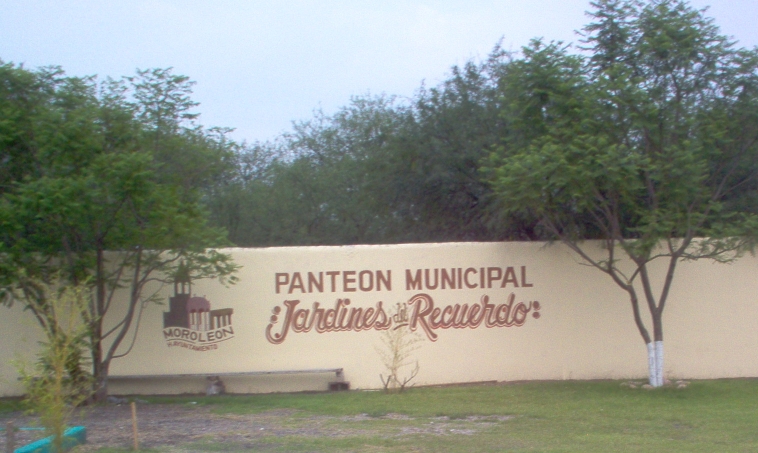 The following morning we gathered again at the panteón (cemetery). The sacred dirt in its shoebox, candles, photo, cross, the statue of the Virgin of Guadalupe, some sacred saint prayer cards, rosaries, the glass of water and the white cloth were all stuffed unceremoniously in the windowed front of the crypt. 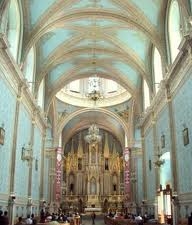 But that wasn’t the end of it.  The next week there was a mass en el Templo del Señor de Escapulitas.  The priest was paid to say the names and ask for special blessings for those recently departed, but my mother-in-law’s name was accidentally left off the list.  So it was rescheduled for Saturday.
Then there was another mass in another church in the wealthy section of town.  I misunderstood where this mass was scheduled and my son and I went to the wrong church and then arrived late for the services.
Then there were masses scheduled every month.  My son and I went to the first few, but as the sons would be there either drunk or hung over, which in my opinion was shameful, I refused to go to anymore.
B made a vow that he would not shave until his mother had been gone one year.  I’m not sure if this vow was meant to be a bargain made to ensure that his mother’s soul left purgatory for heaven or not, but the result is that for most of the year looked like a ungroomed Mexican dwarf with a beard halfway down his chest. The night of the first-anniversary mass, he arrived completely bald and clean shaven.
So this week there was a mass to mark the one-year anniversary of her death. It’s called el primeto luctuoso (which as far as I can translate means the first anniversary of a person being called to the light).  An ad was placed in the paper for the first luctuoso.  This year, the masses will only be every 3 months.  An ad will be placed in the paper for the second luctuoso.  Next year they will only be performed every 6 months.  An ad will be placed in the paper for the third luctuoso.  After that, there will only be one mass per year until eternity.  Each year with its own newspaper ad.
Again, I discovered that the quality of the misa (mass) is dependent on the money you pay.  My mother-in-law again was given the basic package service.  I can not imagine how much money the church earns through this system since the masses continue for all perpetuity.  Death is quite a profitable business after all. 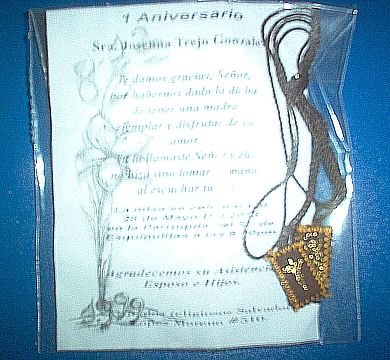 As souvenirs, the few attendees were given escapularios (small sewn leather charms to be worn around the neck) and a poem.  This one reads:
Te damos gracias, Señor, por habernos dado la dicha de tener una madre ejemplar y disfrutar de su amor.  Tu la llamaste Señor y ella no hizo sino tomar tu mano; al escuchar tu voz.  Agradecemos su asistencia, Esposo e Hijos.
Loosely translated it reads:  We thank you, Lord, for given us the honor of having an exemplary mother and of enjoying her love.  You called her, Lord, and she did not refuse to take your hand when she heard your voice.  We thank you for your attendance, Husband, and Children. 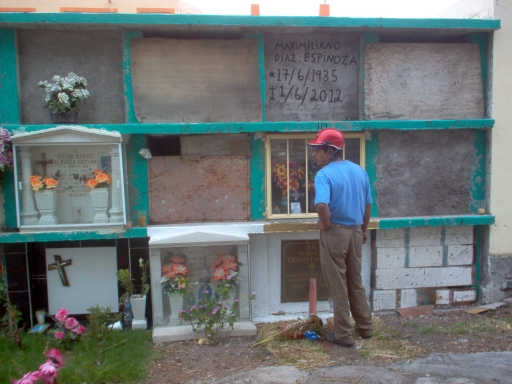