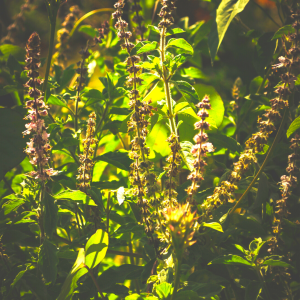 However, some believe that at least one variety, Ocimum campechianum (Cinnamon basil), known as albahaca de monte (mountain basil), is native to Mexico. The fact that there are terms in Nahua (talachía) and Maya (Kha-kal-tun) for Ocimum basilicum seem to support that theory, as do some of the traditional medicinal uses.

Albahaca is used to treat bilis, a Mexican infirmity that is believed to be caused by sudden rage (coraje). Bilis is the Spanish word for bile. The Aztecs believed that the liver was one of the three centers of energy. Strong emotions were centered in the liver, which would then become enlarged when there was an excess of emotion. It was thought that after this extreme emotional outburst, the person would show symptoms of bilis, including intestinal inflammation, gas, constipation, vomiting.

One remedy for bilis included leaves from albahaca, tomato, estafiate (white sagebrush), yerba buena (spearmint), orégano de monte, and a piece of nopal root from the Opuntia cactus. The herbs and root are simmered for 10 minutes, then strained. One cup is drunk daily for 9 days before breakfast.

Albahaca is generally used for digestive issues, which may or may not be caused by bilis. Twenty grams of basil and 200 grams of water are drunk three times daily to stimulate digestion.  Ocimum basilicum is an effective remedy for preventing colitis, gastric ulcers, and diarrhea.

If your upset stomach or attack of coraje is caused by parasites, albahaca has you covered there too. Intestinal parasites are treated with 10 grams of albahaca and 100 grams of water drunk on an empty stomach. Another remedy for expelling parasites calls for fresh basil simmered for 15 minutes and strained. One or two drops of anise oil are added to the tea and drunk as needed.

Caída de mollera (sunken fontanel) is another Mexican ailment that is often treated with albahaca. This condition occurs when the soft spot on a baby’s head seems to be concave. Newborn babies are not held upright in the belief that this will cause caída de mollera.

In addition to a sunken soft spot, other symptoms include vomiting or diarrhea. A sunken fontanel is often a sign of dehydration. Traditional treatment for caída de mollera includes giving the baby weak infusions of albahaca or manzanilla (chamomile), which soothe the digestive system and provide some of the needed liquids as the baby recovers.

Isihuayo is a term used to describe the displacement of a woman’s uterus after she has given birth. Talachía (AKA albahaca) is used to help settle her organs back into place. The woman squats over a steaming infusion of Ocimum basilicum as part of after-birth cleansing rituals. As albahaca has antiseptic, antibacterial, and antidepressant properties, this may be an excellent way to get a new mother back on her feet.

In many areas, it is believed that brujas (witches) can not tolerate the smell of basil. So you’ll sometimes find a basil plant along with an aloe vera plant (which witches reportedly fear) at the entrance of a business as a ward against evil. Although I can’t attest to the anti-bruja effectiveness of albahaca, it is a reasonably efficient insect repellant.

Albahaca is also used in Mexico to help with breathing issues. One remedy calls for boiling 6 leaves in ¼ liter of water for five minutes and then allowed to cool. This is drunk morning and night without added sugar for five days. Studies have shown that the anti-inflammatory properties found in basil are indeed useful in the treatment of asthma and lung inflammation.

If you have canker sores, try gargling with 40 grams of albahaca and 200 grams of water. Remember, basil is anti-bacterial, and it just might bring you some relief. If you have an earache or are experiencing ringing in the ears, ground leaves on a cotton ball placed in the ear might help.

For rheumatism, a rub can be made with one liter of alcohol and equal parts of albahaca, ruda (rue), and romero (rosemary). Use this linament on affected areas for 8 days. Basil has is an analgesic which would explain why this treatment is so effective. Migraines are also reduced in frequency and severity after basil essential oil is applied to the temples every eight hours.

Regulation of menstruation is another condition that albahaca is called upon to remedy. One method is to drink 4 cups of 100 grams of basil per liter of water. Another technique consists of a spoonful each of dried ruda (rue) albahaca, and yerba buena (spearmint) steeped in a cup of boiled water.

Ocimum basilicum has other known health benefits. It helps kidney function. It also aids memory and is classified as an anti-amnesic substance. It has anti-fungal properties and is effective in treating the Zika virus.

There’s certainly more to this herb than a tasty culinary additive!

One response to “Natural Healing — Albahaca”