December 24 marks the end of Las Posadas in Mexico. On this night, the infant Jesus figurine is placed in the manager in line with the belief that he was born on this night.  (We know better, but who can argue with tradition? See also When was Jesus born?)  In Las Posadas song, we are assured that Maria was finally granted a corner to shelter in after being recognized as the Queen of Heaven, as Mexican Catholics still refer to her.  However, unlike a true queen, there was no mention of attendants to assist her in her delivery.  Maria gave birth alone.  As those male bible writers neglected the details, today I’d like to share the birth story of Ona, born to Jamie in the mountains of Michoacan, yet another inspirational Modern Day Maria.

I never tested, I just knew. For a long time, I didn’t tell anyone, not even V. Several months passed as this mysterious potency grew within me. Like the sky just before dawn, the light was building and would soon spill out over the mountain tops. And so it did. 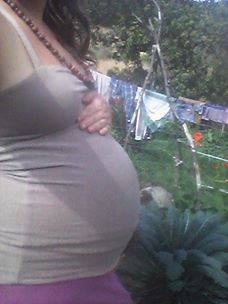 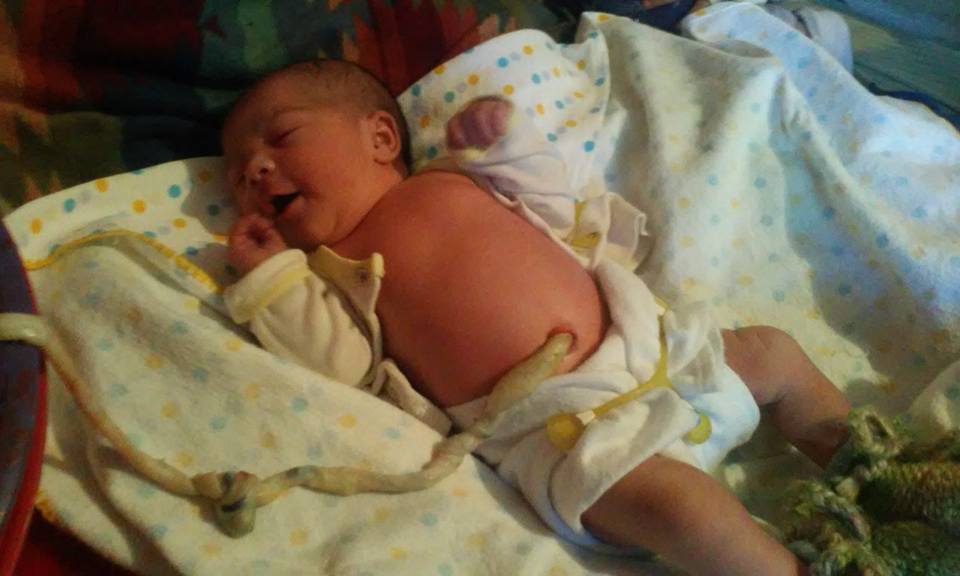 Valentin turned on the light in the middle room where the fire was blazing. He pulled the serape (blanket) to the side allowing enough light to come through to where I was sitting with the baby. He found dry towels and blankets for us and he was the one to notice the rare, true knot tied in her umbilical cord. After examining the knot we realized we hadn’t checked to see if it was a boy or girl. We both thought boy for sure, and were very surprised to see that she was a girl!
After a while, I felt like I was ready to release the placenta and move to a more comfortable spot. It came out easily and then the kids started waking up. All three crowded around us on the kitchen floor in amazement. My four year old said, “Oh, hi baby. Now we get to eat the yummy things in the freezer!” And so at 2:30 in the morning, we put the lasagna and the pear-apple crisp into the oven and got back into bed to rest while they baked.
I took some motherwort tincture and homeopathic arnica. V brought me a cup of hot coffee. I drank what felt like gallons of water. Baby stayed connected to her placenta, which was draining in a plastic strainer inside a bowl next to her. She and I were both very alert and awake while the others slept until sunrise.
After breakfast, I sat by the fire and washed the placenta with warm water. When I took off two chunks with my fingers to make medicine, I noticed she startled a bit. I thanked her and her placenta and dropped the pieces into alcohol. I packed the placenta front and back with Himalayan pink salt, ground lavender and cedar and calendula flowers from the garden. I wrapped it up in a cotton diaper and placed it in a little basket next to her. She seemed to enjoy it and the kids were taking it all in as well.

Over the next several days, we kept the house hot. I repacked the placenta in salt and herbs and new dry cloth diaper twice a day. I let the sun streaming in the windows shine on it and the cord as we lay in front of the fire. By the third day, the cord was dry except for the knot, which I coated with dried ground cedar in the morning. By sunset, the knot had dried out and turned brown like the rest of the cord.
The fourth day was challenging for me. The cord became completely stiff but was still very much attached. It was difficult to move her around, and at that point, I felt ready to move a little more. A real lesson in patience. After contemplating severing the connection, I began asking myself why I felt the need to rush this or move it along at my pace? This was hers. This beautiful brand new birth space will never come again. So I asked my medicine cards what was happening with her, her cord and her placenta. I drew the Deer. Regeneration and renewal. Finding your calling. The picture speaks volumes… To me it looks like the tree of life transferring all that you will become, through the ring of your own eternal history unto a child with open arms… All overlaid on the head of a deer.
I had a dream on the fifth night that she let go of her cord. The sixth day I saw that it was hanging on by a thread. I sat watching her most of the day as she slept peacefully. She grabbed her cord several times and I wondered each time if that would be the moment, but each time she let go. Part of me was ready to be able to pick her up easily and carry her around. But part of me felt sad knowing that these sacred days of sitting by the fire, building altars to the wholeness and beauty of creation, were coming to an end. Everything woven in this new beginning is woven within us and will live through each new dawn…… That night I wrapped her and her placenta up in a blanket, still connected, and went to sleep.
The garden was full of giant white calla lilies that had just bloomed when I went outside in the morning. Baby seemed much more awake and alert as she took in her surroundings. She kicked off her cord as soon as I unwrapped her blanket. She shivered and let out a little squeak, and smiled. Lotus-born on the seventh day.

They say that anyone who witnesses a lotus birth is healed. I believe that this is true. Valentin was against the idea and asked me several times in the first few days to cut the cord. Then one day, while she was laying there with her placenta unwrapped in the basket, with flowers and crystals and shells, and the morning sun streaming in… I saw him stop to watch her. I could see that it touched him deeply and saw something shift and soften. Not that he was less masculine, but that the masculine element had taken in a deep healing. The wound of separation was no longer active and needing to prove itself. I could see this new reality manifesting in many subtle ways over the next several days. My children would gather around her placenta and say how beautiful it is and my four year old even told me he loves it. This birth has been a blessing for our whole family.
I used to read birth stories about women moving through labor, with these amazing, supportive partners, and feel like I was missing something. It made me angry in a way that my kids’ dad was so reserved and didn’t offer loving words or counter-pressure or massage, we never stared into each others’ eyes and didn’t experience that bonded connection that I so often read about. It took me five births-four with him present- to figure out what I really needed. I didn’t need to borrow his strength, I needed to find my own. I didn’t need him to love me and tell me I was doing great, I needed to find a way to deeply love and encourage myself. I needed to claim my own truth and beauty and surrender completely, instead of falling into the safety net of somebody’s waiting arms. This time, I needed everyone and everything to step out of the way. And he did. He allowed me to find my way while holding his natural place. I finally came to honor his natural place because I learned to hold my own. This too is a dance. I finally feel like I got it right. I feel whole and complete. I had my dream birth down to the details, and I am in awe that it really happened. 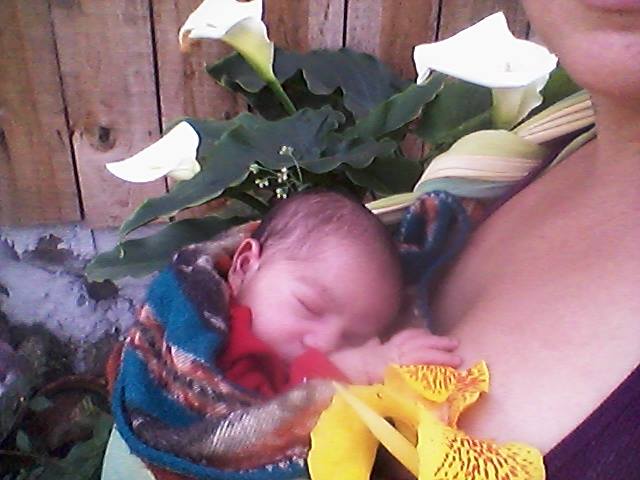 My labor was five hours from the first contractions until she was born. This was my fifth birth after having a natural breech birth, an unnecessary cesarean, and two hospital VBACs. I free birthed my baby, alone in my candle lit kitchen, in the rural mountains of Central Mexico. Like the climb into the butterflies, I suddenly found myself in a place of raw and potent power. The space between worlds where new life enters, wrapped itself around me like a blanket of stars, holding me and my new daughter as I too came through the hoop and was powerfully reborn.

For the full story and countless other inspirational adventures experienced by Jamie and her family,  please go to The Way.